Posted by admin, on 19. January 2018
0
Doing the same old push-ups day in and day out can feel a little boring, so we’re here to shake things up. Variety can supercharge a workout and throw a whole range of new muscles into the mix. Just be sure to spend some time perfecting your form and nailing the basics before you jump into the variations that require increased strength, coordination, and balance
Push-ups are everywhere — high school gym classes, the military, gym, studios or even used as a form of punishment. With good reason: Push-ups are tough. While people at gyms spend lots of time on benches and other fancy equipment, push-ups may be an even more effective way to get you stronger, faster. And they’re far more versatile than people think. Push-up variations can strengthen your abs, back, legs — pretty much every muscle in your body, really. Here are 17 versions of the push-up you aren’t doing but should be. Add them to your workout and you’ll see (and feel) powerful results
ELIMINATE FORM MISTAKES
There are a few classic form failures that can indicate areas of weakness. If your lower back sags, it shows your core is weak. If your shoulder blades flare out from the body at the top, the serratus anterior (muscles along the side of your rib cage just underneath your arms) need work. Try doing high planks for your core, and mountain climbers (bringing your knees to your chest on alternating legs while in a high plank) for your serratus anterior
KNEE-TO-ELBOW (SPIDERMAN) PUSH-UP 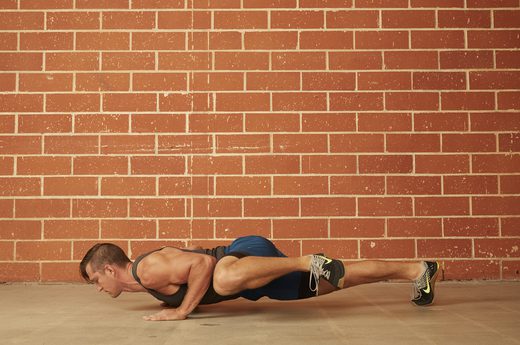 The following two push-ups increase the demand on your core and upper body by decreasing the number of places where your body is in contact with the ground. HOW TO DO IT: Begin at the top of the push-up position. Keep your back straight and lower the torso under control. At the bottom of the push-up, bring your knee to the outside of your elbow. Then return your leg to the starting position and extend through your elbows until you reach the top of the push-up. Alternate sides on each rep 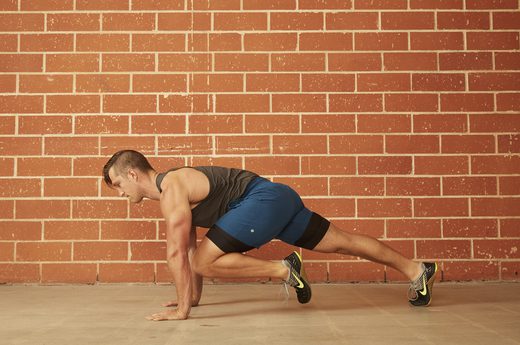 By bringing your knee up to your chest, your abs, shoulders and hip flexors have to work overtime to keep you off the ground. HOW TO DO IT: Begin at the top of the push-up position. Keep your back straight and lower the torso under control. Press back up with your arms, and at the top of the push-up, bring one knee up under the chest. Make sure your foot doesn’t touch the ground. Return your leg to its original position, then lower yourself back down and repeat, lifting the opposite leg. Continue alternating throughout the set 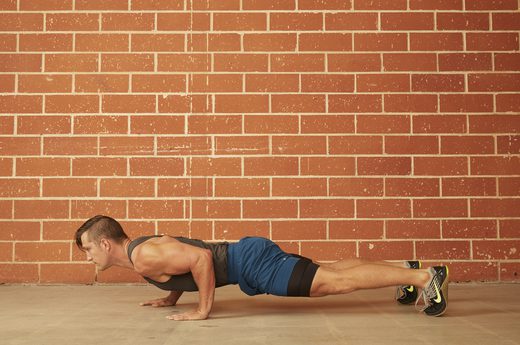 Changing your arm position increases the stress on your opposing arm, meaning your triceps, pectorals and serratus anterior need to put in extra effort to keep you going. HOW TO DO IT: Start in a standard push-up position, but walk one hand a step forward from where it usually is. Lower down and back up as usual. Switch which hand is in front with each rep 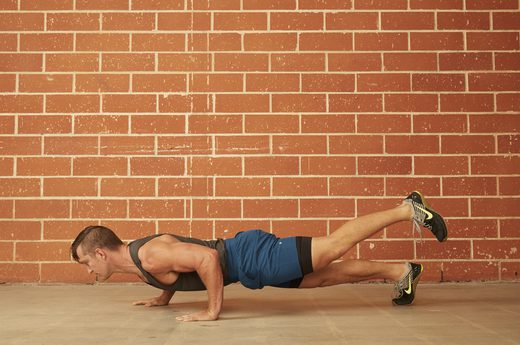 Last variation too easy? Now try it balancing on just one leg! HOW TO DO IT: Begin at the top with one hand out farther in front than the other. Lift the leg on your opposite side, keeping that knee straight and core tight. Keep your back straight and lower the torso under control. When you reach the floor, fire up your pecs and shoulders, and extend at the elbows to return to the starting position. Perform five to 10 reps on one side, and then repeat with your other hand forward and opposite leg raised 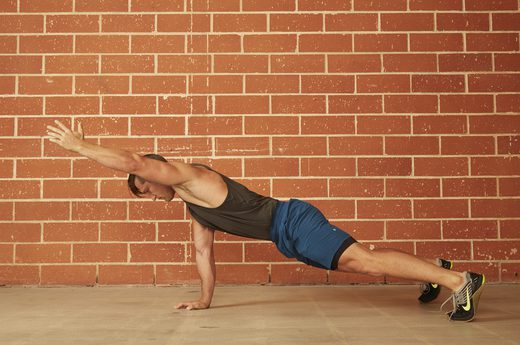 This variation makes a great precursor to learning the one-arm push-up. HOW TO DO IT: Start this exercise as if it were a normal push-up. When you reach the bottom position, extend at the elbows quickly, pushing yourself up rapidly. At the top of the motion, raise one straight arm overhead. Lower the hand back to the floor and then lower your body back down for the next rep. Alternate which arm you lift on each rep as you continue the set 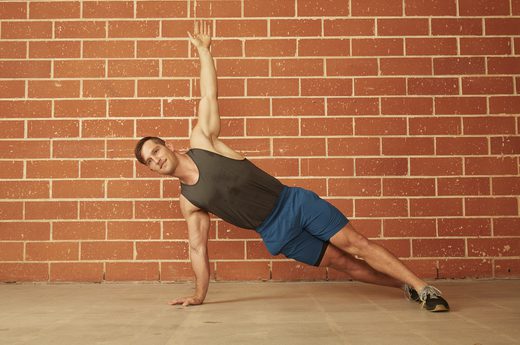 Fire up your obliques by adding a side plank at the top of each push-up. HOW TO DO IT: Begin at the bottom of the push-up with your elbows bent and torso straight. Extend at the elbows to reach the high push-up position. At the top of the movement, turn at the shoulders and reach one hand as high as possible toward the ceiling. Then reverse the motion and return under control back to the starting position. Switch between lifting your left and right arm on each rep 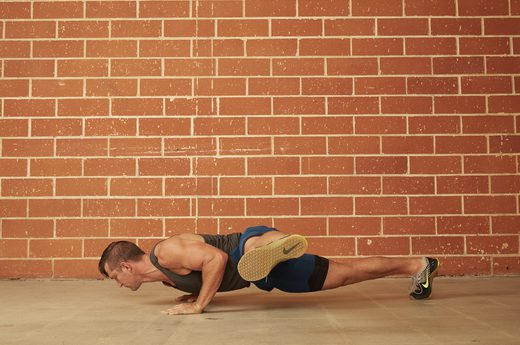 When you change the position of your leg during a push-up (like with this version), your entire center of mass changes. HOW TO DO IT: Begin at the top of a typical push-up position. Keep your back straight as you lower the torso under control. At the bottom of the push-up, kick your foot out to the side, keeping your knee straight. Then return your leg to its original position and extend at your elbows until you return to the top of the push-up. Then lower yourself again and repeat the movement on your other side, lifting the opposite leg
Related article:  3 TIPS FOR A BIGGER BENCH PRESS! 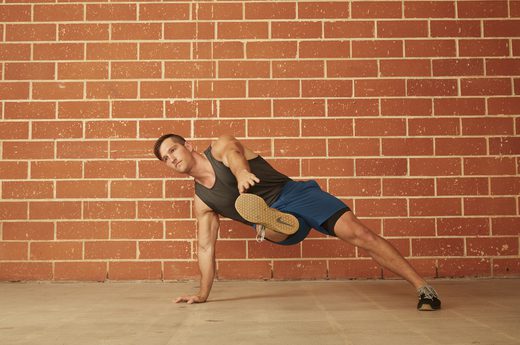 In this version, your weight is distributed differently through your arms and legs, requiring contributions from all of the muscles in your body. HOW TO DO IT: Begin in the low push-up position and extend the elbows to reach a high plank. At the top of the movement, turn at the shoulders and kick one foot under the body and as high as possible while touching that toe with your opposite hand. Then return your foot and hand to their original positions, lower yourself to the start and repeat on the other side 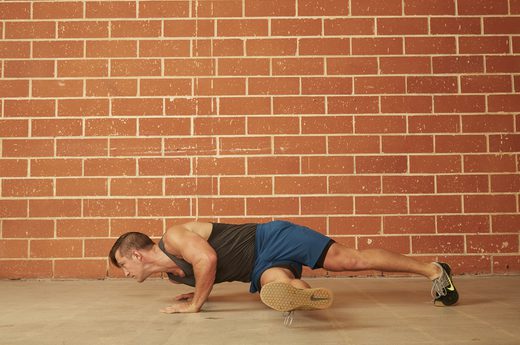 This push-up variation is especially challenging for your shoulders, arms and core. HOW TO DO IT: Start at the top of the push-up with your elbows extended and torso straight. Kick your left leg under and across your body. Lower your chest to the floor without letting your hips touch the ground. Extend at the elbows, return to the original position and repeat on opposite side 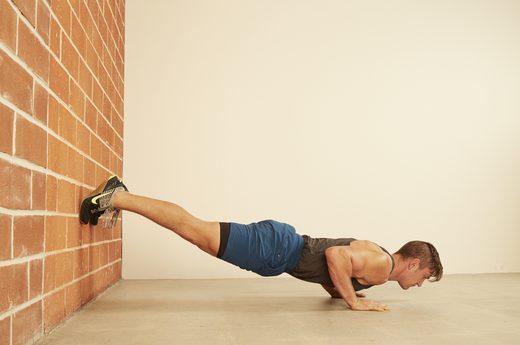 Ready for a total-body challenge? This version not only requires a ton of upper body strength, but a lot of core stability, too. HOW TO DO IT: Begin in your typical high push-up position, but then use your hands to press your feet into the wall. You want your toes to be facing down, positioned about eight to 12 inches off the ground. Lower your chest to the floor by bending at the elbows. Do your best to keep your elbows close to your sides — try not to let them splay out. Then push through your hands, extend at the elbows and return to the original position 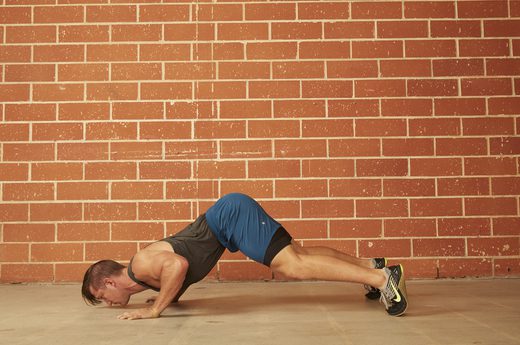 For this push-up, begin with sets of five and gradually work your way up to doing sets of 10. Work on your regular push-ups first, and slowly incorporate this modifications into your routine as you build strength. HOW TO DO IT: Begin in the high push-up position, but spread your legs out to the side, rather than positioning them directly behind you. Lower the head and chest out as far in front of the hands as possible. Drag the forehead as close to the ground as possible while pressing the body backward and hips upward. Finish with your hips up, the head down and the elbows extended. Then return to the starting position and repeat the cycle again 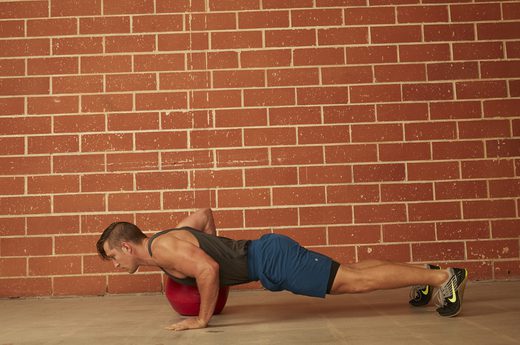 Your triceps are particularly challenged by the push-up in which both hands are on the ball and your core activates to keep you balanced as you alternate hands. HOW TO DO IT: Get into a push-up position with both hands placed on the ball and legs extended behind you. Bend your elbows to lower your chest toward the ball for a push-up. As you rise, lift your left hand and place it on the floor, leaving your right hand on the ball, to perform a push-up. Return to center and repeat with the right hand to the floor 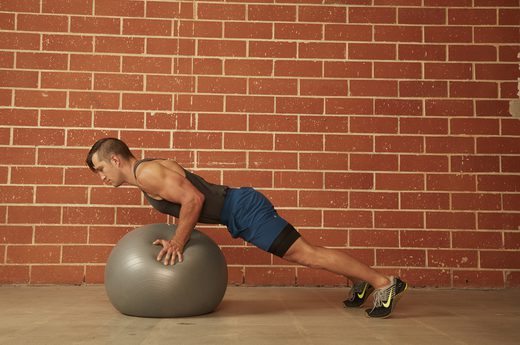 Do a push-up but with your hands on a stability ball to increase how much your core must activate to keep you from falling. HOW TO DO IT: Your hands rest on the ball, under your shoulders with the elbows in the direction of the ankles. Squeeze the ball with your hands and arms. Extend your feet directly behind you 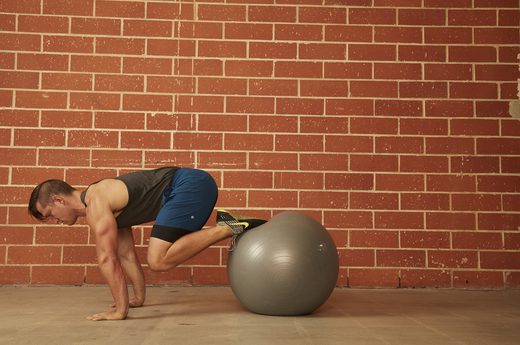 Take the version from the last picture and add even more ab muscle recruitment. You’ll definitely feel this one in your lower abs. HOW TO DO IT: Place your hands on the ground and your shins on top of a stability ball. Perform a push-up, and then at the top, use your abs to roll the stability ball up toward your chest. Roll the ball back out and repeat 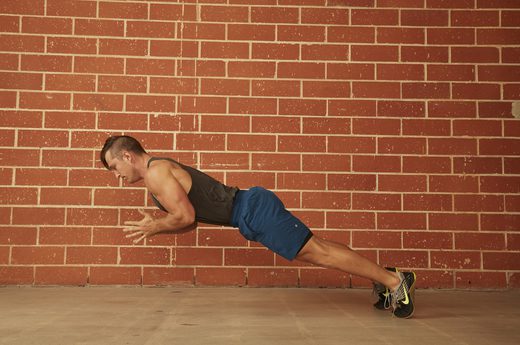 This plyo push-up will really get all the muscles in your chest and back firing! HOW TO DO IT: Do a standard push-up, but as you press up from the floor, do so explosively so the hands leave the ground and clap together before you return to a bent-elbow lowered position
Related article:  The 3 Best Ab Exercises 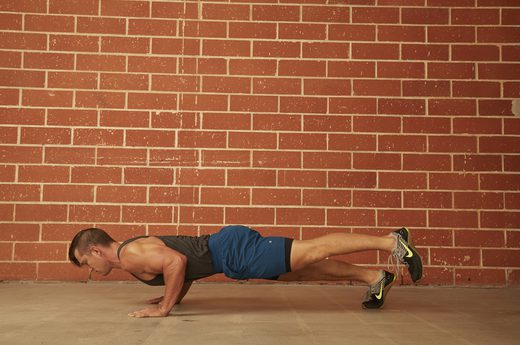 By lifting one foot off the floor, you’re going to have to support more weight in your upper body, leading to greater strength gains. HOW TO DO IT: Begin again in a high plank but lift one foot a few inches off the floor. Keep your core engaged as you lower down and back up, keeping your lifted foot where it is. Make sure to do the same number of reps on each side 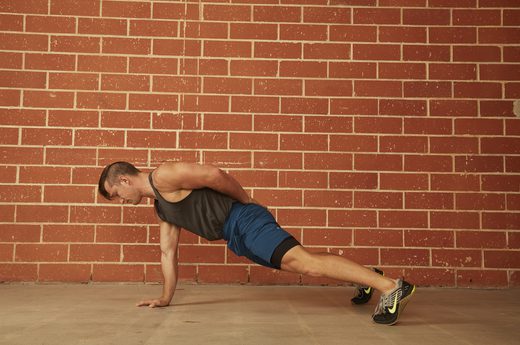 Are you ready for an insane test of upper body and core strength? Meet: the one-arm push-up. HOW TO DO IT: Get into position by starting in a standard plank. Center your right hand under your chest and place your left hand behind your back. Spread your feet further apart than usual for added support and stability. Bend your elbow as close to your body as you can and lower down as far as you can go. Press back up