Like every other body part, training smart is the key for developing a big pair of arms. Massive gains are built using compound movements, heavy enough weights, good technique and full range of motion. But besides training, they also need a good amount of rest and food to grow.

The triceps help stabilise your shoulder joint and they act as an ex-tensor of the elbow and shoulder. As your triceps become stronger with these exercises, the strength and stability of your shoulders and elbows increase. The functionality, flexibility and range of motion of your arm increases the more you work and strengthen these muscles.

As a result, your performance improves in sports that require arm movements and upper body strength, supersets are a good protocol for hypertrophy as they help create the biological and hormonal environment necessary for muscle building

In this article the workout consists of supersets:

Supersets are also done with antagonistic muscles, i.e., opposing muscle groups, such as biceps and triceps, for example, alternating a push with a pull. These supersets tax the upper body exclusively, but allow one set of muscles (on the front or back of the body) some active rest while the opposite muscles work and vice versa.

We will first focus on the big movements that are to increase the strength and power of your upper arms and we will finish with some higher rep movements used as hypertrophy work. These are the 6 best movements for putting gains of muscle to your arms and will be performed as shown below: 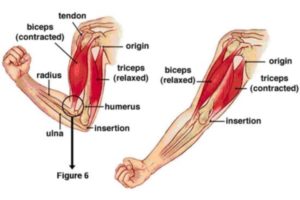 Close Grip Bench Press
This is probably the single best exercise for building strength and mass in your triceps. Because of the nature of the exercise, you will be able to use big weights. Increase the weights on every set and use a weight that you can push 5-6 times to failure in the last set. Rest 30 seconds after every set and quickly switch to close grip chin-ups.

Lie back on a flat bench. Using a close grip (around shoulder width), lift the bar from the rack and hold it straight over you with your arms locked.
As you breathe in, come down slowly until you feel the bar on your middle chest.
After a second pause, bring the bar back to the starting position as you breathe out and push the bar using your triceps muscles. Lock your arms in the contracted position, hold for a second and then start coming down slowly again.
Repeat the movement for the prescribed amount of repetitions.
When you are done, place the bar back in the rack

Close Grip Chin-ups
While chin-ups are primarily a great back exercise, close grip chin-ups work the biceps big time. Try to swing as little as possible and concentrate on pulling with your arms instead of your back.

Grab the pull-up bar with the palms facing your torso and a grip closer than the shoulder width.
As you have both arms extended in front of you holding the bar at the chosen grip width, keep your torso as straight as possible while creating a curvature on your lower back and sticking your chest out.
Keeping the torso as straight as possible maximises biceps stimulation while minimising back involvement.
As you breathe out, pull your torso up until your head is around the level of the pull-up bar. Concentrate on using the biceps muscles in order to perform the movement. Keep the elbows close to your body.
After a second of squeezing the biceps in the contracted position, slowly lower your torso back to the starting position; when your arms are fully extended.
Breathe in as you perform this portion of the movement.
Repeat this motion for the prescribed amount of repetitions.

Triceps Dips
The second best exercise for building strong and bigger triceps. You should use narrow grip and not let your shoulders drop below your elbows on your way down. If the dips are too hard you can use the dip machine.

To get into the starting position, hold your body at arm’s length with your arms nearly locked above the bars.
Now, inhale and slowly lower yourself downward. Your torso should remain upright and your elbows should stay close to your body. This helps to better focus on tricep involvement.
Lower yourself until there is a 90 degree angle formed between the upper arm and forearm.
Then, exhale and push your torso back up using your triceps to bring your body back to the starting position.
Repeat the movement for the prescribed amount of repetitions.

EZ Barbell Curl
The EZ Bar is better than a straight bar because the way you grip it puts both your wrists and elbows in a more natural position than a straight bar. Increase the weight on every set and choose a weight that allows you to do 10 reps to failureon the last set.

Stand up straight while holding an EZ curl bar at the wide outer handle. The palms of your hands should be facing forward and slightly tilted inward due to the shape of the bar. Keep your elbows close to your torso.
Now, while keeping your upper arms stationary, exhale and curl the weights forward while contracting the biceps. Focus on only moving your forearms.
Continue to raise the weight until your biceps are fully contracted and the bar is at shoulder level.
Hold the top contracted position for a moment and squeeze the biceps.
Then inhale and slowly lower the bar back to the starting position.
Repeat for the recommended amount of repetitions.

Dumbbell Triceps Extension
This is an isolation movement, a great finishing exercise. Remember this is your final exercise so keep the weight lower and just keep the blood flowing in the triceps.

Lie on a flat bench while holding two dumbbells directly in front of you. Your arms should be fully extended at a 90-degree angle from your torso and the floor. The palms should be facing in and the elbows should be tucked in.
As you breathe in and you keep the upper arms stationary with the elbows in, slowly lower the weight until the dumbbells are near your ears.
At that point, while keeping the elbows in and the upper arms stationary, use the triceps to bring the weight back up to the starting position as you breathe out.
Repeat for the recommended amount of repetitions.

Seated Dumbbell Curls
A great unilateral exercise that is going to give you a great pump in your biceps. Keep the weights low and do 3 sets of 10-12 reps.

Sit on a flat bench with a dumbbell on each hand being held at arms length. The elbows should be close to the torso.
Rotate the palms of the hands so that they are facing your torso.
While holding the upper arm stationary, curl the weights and start twisting the wrists once the dumbbells pass your thighs so that the palms of your hands face forward at the end of the movement. Make sure that you contract the biceps as you breathe out and make sure that only the forearms move.
Continue the movement until your biceps are fully contracted and the dumbbells are at shoulder level.
Hold the contracted position for a second as you squeeze the biceps.
Slowly begin to bring the dumbbells back to the starting position as your breathe in and as you rotate the wrists back to a neutral grip.
Repeat for the recommended amount of repetitions

As with any other muscle group you should give the arms a good amount of time to rest, especially since they are involved in all other upper body movements such as bench press, rows or pull ups.