To do this the right way and get the best results possible, the true goal while bulking is to build muscle while keeping fat gains to an absolute minimum. When cutting, the true goal is to lose fat while maintaining all of the muscle you’ve built. If you do it the wrong way, you’d gain too much excess body fat while bulking and/or lose too much lean muscle while cutting.

A person would then alternate between phases of bulking and cutting until they’re as lean and muscular as they desire.

Now after hearing all of this, there are always three questions that come to mind.

Their answers are a little complicated and will take an entire article of their own to properly explain. But right here and now, it’s the first question that I want to focus on and answer.

Should I Build Muscle Or Lose Fat First?

If you’re asking this question, then there’s one safe assumption I can make, you currently have body fat you’d like to lose and muscle you’d like to gain.

But I mention it to make sure we understand that if you’re just fat and don’t really care much about building muscle, you wouldn’t be asking this question. You’d just lose fat first because that’s the primary (or only) goal you care about. The same goes for if you’re already pretty lean/skinny. In that case, you don’t care about losing any more fat, you just want to build muscle.

But if you’re asking this question, you just can’t figure out which to do first.

And in that case, while there are a few factors to consider when making this decision, there’s one that matters more than all of them: 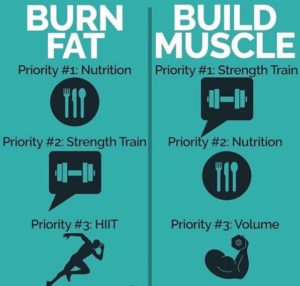 What Is Your Current Body Fat Percentage?

The key to doing a “smart” bulk and ending up with something good to show for it in the end is to avoid gaining excess body fat while you build muscle.

Your diet and weight training routine are the key factors in optimising this muscle: fat gain ratio, but there’s actually something else in your control that plays a significant role in this area: your current body fat percentage. Why? Because…

The fatter you are and the higher your body fat percentage gets, the worse your calorie partitioning gets and the more likely your body is to start storing excess calories as fat instead of muscle.

The ideal starting point for a muscle building phase is when you are at least somewhat lean. How lean exactly? Well, you don’t have to be super ripped with an 8 pack or anything like that. But, to a certain point, the leaner the better.

Starting higher than that can work of course, it’s just probably going to yield sub-optimal results.

Related article:  10 Foods That Give You a Bloated Stomach

Who Knows Their Body Fat Percentage

However, since most people have no idea what their body fat levels truly are and the typical methods for finding it (online calculators and digital body fat scales) don’t work, the average person won’t really know for sure if they are indeed at this “at least somewhat lean” status.

Take off some clothes and look in the mirror. Or, take some pictures. Do you look like someone whose goal right now should be losing fat or building muscle?

Then, find your answer below: 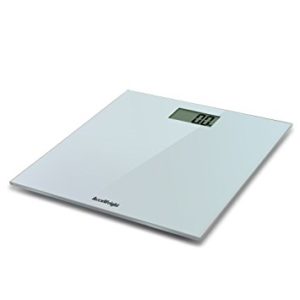 I’m In An Already Fat State

If you do indeed consider yourself as being in too much of an already fat state, then the very best thing you can do now is cut first and lose that fat.

Once you’ve lost enough fat and reach “at least somewhat lean” status, that’s when you should start a full muscle building “bulk” phase and create the caloric surplus you need to build that new muscle.

That doesn’t mean you should hold off on (or stop) weight training until you reach that point of leanness. You should definitely still weight train the entire time. It will help a bit with the fat loss, and even more importantly, it’s the only way you will maintain the muscle and strength you currently have. 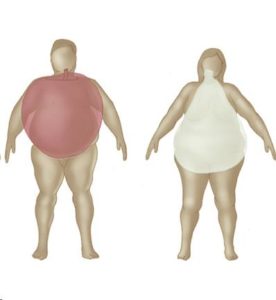 In this case, while bulking might be the obvious decision, you can technically start off with whichever phase you want based on what’s most important to you right now.

For example, you might want to build more muscle. That might be your long term goal. But if you have some good reason or preference in the short term for getting even leaner than you currently are (some kind of event coming up, curious to see what a six pack looks like, want to start your bulk as lean as possible, etc.), then go for it and then start to bulk right after that.

But if you’re lean enough to start bulking and all you really care about is just building more muscle already, then let the bulk begin!

You can focus on getting extra lean later on when you actually have some muscle mass to uncover. 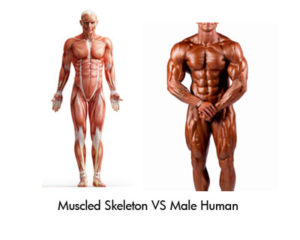 So, here’s how it works. Use your current body fat percentage to help you determine if you should bulk or cut first.

Whichever it is, make sure your diet and workout are designed as intelligently as possible so you don’t gain excess body fat while you bulk and you don’t lose any muscle mass while you cut. This step is key.

Then, after you’ve put in enough time, effort and consistency for progress to be made, switch on over to the other phase and do the same. Depending on exactly what your goals are and exactly how much muscle you want to build and how much fat you want/need to lose, you can repeat this process as many times as needed.